Fresh off the back of a memorable season opener in Mexico City, Formula E and the GEN3 era is set for its next instalment - the 2023 CORE Diriyah E-Prix Rounds 2 & 3.

The Diriyah Street Circuit, just outside of the Saudi capital, Riyadh, forgoes the permanent circuit layout of the Autodromo Hermanos Rodriguez in Mexico City for a full street circuit - snaking the historic city's walls at the UNESCO World Heritage site. Its a second new challenge in as many weeks with the snaking, bumpy bobsleigh run of the Driiyah track a favourite of the drivers - and it's one of the most demanding circuits on the calendar for balancing energy management and outright pace, though drivers have never found overtaking a problem.

The 2023 CORE Diriyah E-Prix Round 2 gets underway at 18:00 local time on Friday 27 January. Find out where to watch and sync your calendar for all the latest updates and session times.

Avalanche Andretti's Jake Dennis sits at the top of the Drivers' World Championship after taking the first victory of this new generation for Formula E with a dominant drive to the top step in Round 1, having earlier fired to the front row in qualifying. Porsche power proved a force in Mexico, with the factory 99X Electric Gen3 of Pascal Wehrlein following home in second - the pair 11 seconds clear of third-placed Lucas di Grassi in the Mahindra, on a fighting debut for the Anglo-Indian team.

In fact, four of the top seven cars across the line were born of the Stuttgart manufacturer's stable. It was a proud moment, with Andretti currently leading the factory squad in the Teams' table, but the German outfit are keen to double down on this early promise, with eyes on more silverware and, ultimately, a first Formula E title in what is its fourth season in top-tier electric motorsport. With the rate of development we saw between the Valencia test and Mexico City, though, nothing is a given as teams start to uncover the secrets of their all-new machinery.

That pace of change saw one of the early-season favourites in DS PENSKE struggle in mid-pack - something not many would have predicted after DS-powered Maserati MSG Racing posted the benchmark time of the week and had topped five of seven timed sessions in Valencia, with both DS PENSKE drivers Stoffel Vandoorne and Jean-Eric Vergne also in the top three.

WATCH: How to watch every minute of Season 9 where you are

As it happened, the reigning champion and double champion qualified outside the top 10 ahead of Round 1, and Vandoorne recovered only four spots to scrape a point with 10th at the chequered flag. Vergne ran in mid-pack, too, before he misjudged an overtake and clipped Sacha Fenestraz' Nissan.

Maximilian Guenther was the pick of the Maseratis in testing but he struggled to 11th, while teammate Edo Mortara clipped the wall in Free Practice before ending up in the barriers in the race. Work to do, despite promising race pace and energy management. The Swiss-French-Italian has won here before; Round 2 in Season 8, and made the podium the year prior - on paper he's as good an opportunity as any to put things right.

NEOM McLaren's Jake Hughes may be a rookie but his eye-catching testing performances were backed up by a strong first race outing in Mexico City. He wound up fifth but had challenged for a podium throughout. His team, under the prior Mercedes-EQ guise, can count the joint-most wins in Diriyah to its name via Season 7 champion Nyck de Vries. Brit Hughes has the tools at his disposal to go well again on weekend number two in Formula E.

Robin Frijns (ABT CUPRA) suffered a wrist injury on the opening lap which sees him miss out in Diriyah. Kelvin van der Linde will deputise, becoming the first South African to take to the grid in the process.

Jaguar TCS Racing sits sixth in the Teams' table as technical teething troubles saw Sam Bird retire from Round 1 with a broken driveshaft after stopping on track in Free Practice with a faulty MGU.

"It was properly s***," said Bird post-Mexico to Autosport."Everything that could go wrong, did go wrong and continued to go wrong. "I don't think I drove more than four or five push laps the entire weekend. I don't think the car's too bad, it's clearly got a bit of speed in it, but I wasn't able to showcase anything.

"We had a fuss with the software - some fairly major issues within our own software in FP1. We had corrected that for FP2, but we obviously couldn't show it [after an MGU failure ended his session prematurely]. We had to change rear ends for quali after not doing any laps, but the rear end that we put on wasn't set up correctly - we didn't have time." 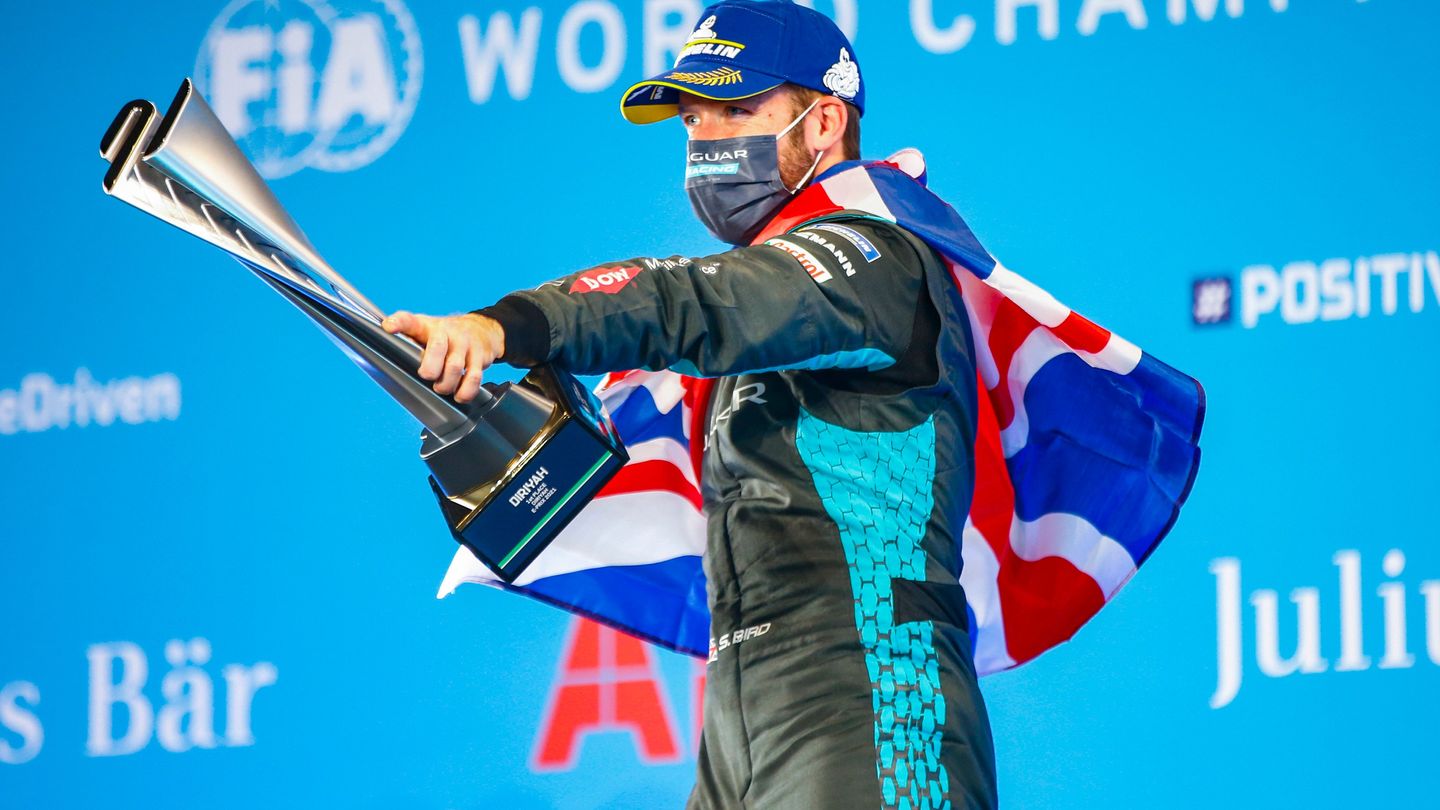 The upside is, there's top 10 pace in the I-TYPE 6, as teammate Mitch Evans showed with eighth in Mexico. Plus, nobody has won more races in Saudi Arabia than Bird - his two victories tied with de Vries - and nobody has gone quicker around the Diriyah Street Circuit.

“I’ve got fond memories of competing in the Diriyah E-Prix as I’ve won the race twice before and I currently hold the record for the fastest lap which I secured last year. While the result in Mexico City was disappointing, we have learnt from the data and I am positive about the next two rounds. It is my 100th race in Formula E which I can’t quite believe and I want to mark that with a decent result.”

Only one driver to-date has his the 100-race mark in Formula E, with Lucas di Grassi achieving the feat back in Seoul as we closed out the GEN2 era last season.

In Diriyah, three drivers in Bird, Sebastien Buemi (Envision Racing) and Jean-Eric Vergne (DS PENSKE) will join him: each of which have been with us over three generations, as the Brazilian has.

Dicing in the dark

The then-Saudi Arabian season-opener has hosted Formula E's night races since their first appearance at the Season 7 Diriyah E-Prix. In Season 9, the circuit will again be lit by 22 Formula E cars and their Halos, plus the latest low-power LED technology around the circuit.

These reduce energy consumption by up to 50 per cent compared to non-LED units, and they will be powered by sustainably-sourced biofuel generators.

How do the drivers find racing at night?

"I love racing in Saudi – the track is amazing,” said Season 6 champion Antonio Felix da Costa, TAG Heuer Porsche. “I was the first winner there in Season 5 and I’ve got great memories. We go well every time we go there.

“With it being a night race, your practice and qualifying happen during the day and then you race at night. Temperatures change, along with the track surface with the sand getting brushed away.

"Your perceptions also change with the shadows changing. It takes a little bit of adaptation and training to the eye but I love the different variables and it definitely creates a better show for the fans. It’s very cool to race there, and great to watch – especially at night.”

Old meets new in the ancient surroundings of Diriyah. With 21 twists and turns, the 2.495km Diriyah Street Circuit skirts around the historic UNESCO World Heritage site.

The drivers face a challenging lap from the finish line as a technical first sector leads into the snaking Bobsleigh Run at Turn 6, a series of fast changes in quick succession. 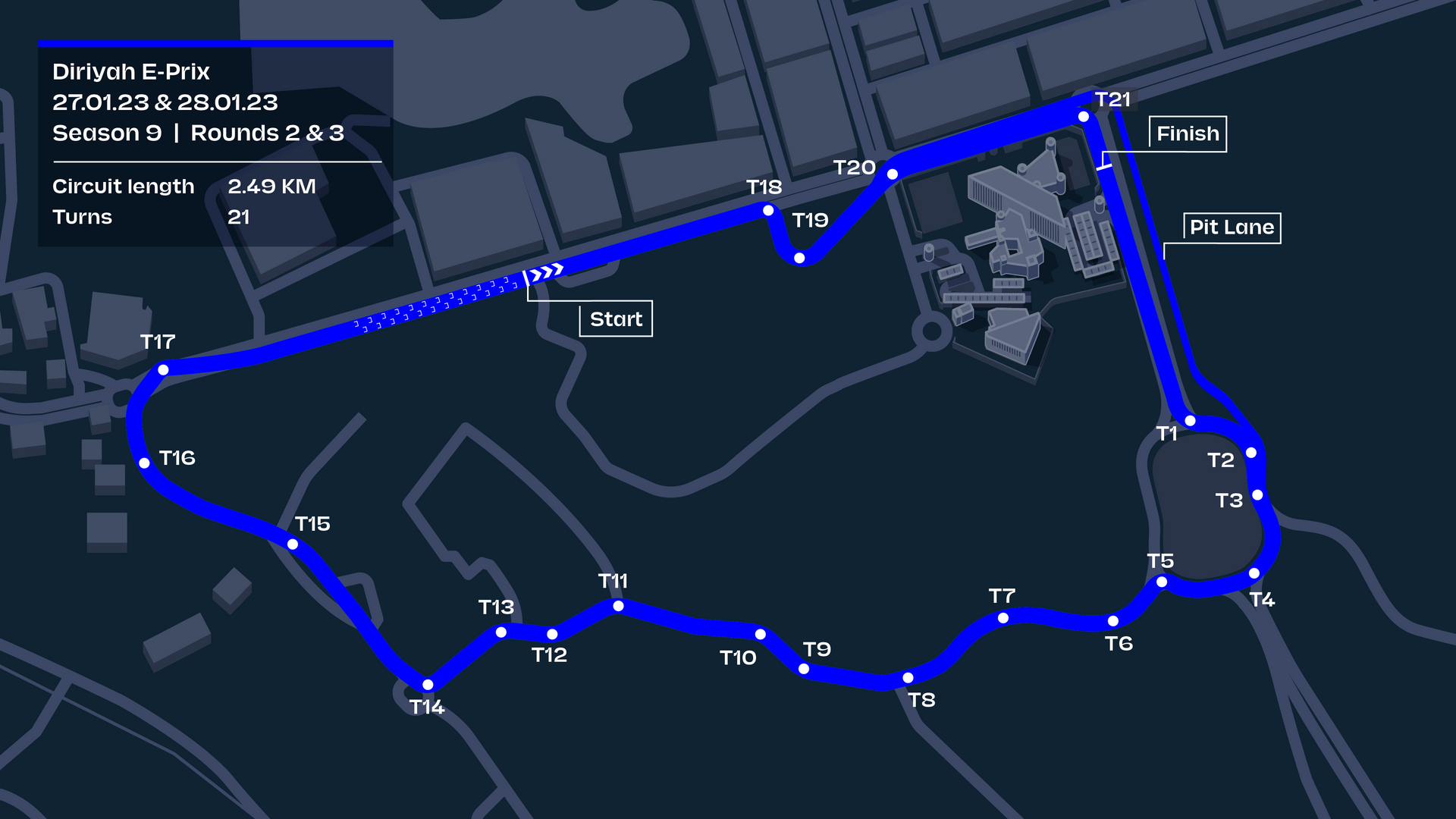 Find out all the ways to watch where you are.

Follow the action on-track and Gen3's first competitive outing as it happens in the brand new Race Centre. Keep across Live Timing – which includes a real-time interactive track map and the ability to follow your favourite driver during every session of every E-Prix – plus highlights, detailed session reports, exclusive interviews, all the standings and results as well as data, insight and reaction from trackside.